It is a cultivar of Capsicum frutescens, one of the sources of chili pepper, that grows both wild and domesticated.

It is a small member of the Capsicum genus. It grows in Malawi, South Africa, Ghana, Nigeria, Zambia, Zimbabwe, Mozambique, and the tropical forests of South Sudan & the southern half of Ethiopia. It was brought to Goa by the Portuguese and then the plant adapted to its new surroundings, and that is how it grows in such a hot climate.

Pili pili is the Swahili word for ‘pepper pepper’.[2] Other English language spellings may include pili pili in the Democratic Republic of the Congo or peri peri in Malawi, deriving from the various pronunciations of the word in parts of Bantu languages-speaking Africa. Piri piri is the spelling of the name as used in the Portuguese language, namely in the Portuguese-speaking Mozambican community.[2] “There’s a lot of debate about how the piri-piri pepper came to Portugal”, says Dave DeWitt, author of The Chile Pepper Encyclopedia (Morrow, 1999). “The peppers were originally brought back on Columbus’s voyage to the Americas. Most people believe that the Portuguese took the chiles to their colonies of Mozambique and Angola, where they were christened a Swahili word that means ‘pepper-pepper’, and naturally cross-pollinated. Eventually, one of the varieties made its way to Portugal, where, for some reason, it retained its African name.”

The Oxford Dictionary of English records “piri-piri” as a foreign word meaning “a very hot sauce made with red chilli peppers” and giving its origin as the Ronga language of southern Mozambique word for “pepper”.[3]

Plants are usually very bushy and grow in height to 45–120 centimeters, with leaves 4–7 cm long and 1.3–1.5 cm wide. The fruits are generally tapered to a blunt point and measure up to 8 or 10 centimeters long. Immature pod color is green, mature color is bright red or purple. Some varieties of birdseye measure up to 175,000 Scoville heat units. 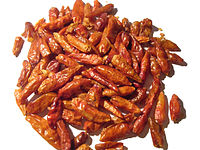 Peri peri has grown in the wild in Africa for centuries and is now cultivated commercially in Uganda, Malawi, and Zimbabwe.[4] It grows mainly in Malawi, South Africa, Ghana, Nigeria, Zimbabwe and Mozambique.[1] It is cultivated for both commercial food processing and the pharmaceutical industry. Cultivation of peri peri is labor intensive.[4]

The Reaper Hot Sauce One of the hottest and neatest collectibles to come along in a long time!
Ingredients: Habanero Peppers, Water, African Oleoresin, Scotch Bonnet Peppers, Salt, Onion, Garlic

Heartbreaking Dawns Ghost Pepper Sauce……..Heartbreaking Dawns focuses on both Flavor and Fire to bring you 1841, the year Reverend Miles Bronson arrived amongst the Naga people, ending the widespread practice of headhunting. This handcrafted hot sauce features the infamous Ghost Chile Pepper. This “superhot,” also know as the Bhut Jolokia, comes alive amidst a blend of all-natural Pear and Apple. While this sauce brings a significant amount of heat we managed to create a blend that allows the subtle and sweet fruitiness of the Pears and Apples to tingle your tongue before that onset of true Jolokia Burn!………

Blair’s Beyond Death Sauce (with Orange Habaneros)..(OUT OF PRODUCTION!)…..

“In 1992, I wanted to make my sauce even hotter then After Death. However, I could only afford to print my own labels that said “Beyond’ and stick them over the word ” After”. The sauce was a great success. The formula evolved and became what is now the world famous “Sudden Death”. The eye on the bottle was the original design created for Death Sauce.
The Original Blairs Beyond Death is now back in 2007 with four new unique labels designs – some 15 years later!!!
The formula has been returned to the original version. Beyond Death is Hot… and has the wonderful hint of Chipotle. It makes one great collector piece and of course… is an amazing sauce for all of your chillihead needs”.

Made with Great Karma! Guaranteed to make you feel alive!

Warning: This product contains the hottest known ingredients on the Planet Earth, please use with extreme caution!

From New Jersey
Blair Lazar is at it again with this collector’s edition Beyond Death that is so hot he had to seal it with his trademark wax seal (Blue) . This formula was originally made in 1992, but it has been brought back from the dead with this killer hot sauce. Use with extreme caution because it will hurt!! ingred: Red and orange habaneros,pepper extract,fresh cayenne,smashed garlic,chipotle,lime juice,cilantro,fresh herbs and spices. 5 oz. New Jersey