Garlic stuffed olives with that Arizona Gunslinger touch ! No body can eat just one. 5 oz.

Only 2 left in stock

Allium sativum, commonly known as garlic, is a species in the onion genus, Allium. Its close relatives include the onion, shallot, leek, chive,[1] and rakkyo.[2] With a history of human use of over 7,000 years, garlic is native to central Asia,[3] and has long been a staple in the Mediterranean region, as well as a frequent seasoning in Asia, Africa, and Europe. It was known to Ancient Egyptians, and has been used for both culinary and medicinal purposes.[4]

Allium sativum is a bulbous plant. It grows up to 0.6 m (2 ft) in height. Its hardiness is USDA Zone 8. It produces hermaphrodite flowers. Pollination occurs by insects and bees.    Garlic Stuffed Olives 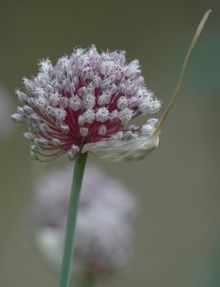 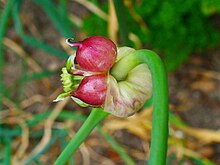 According to Zohary and Hopf,[5] “A difficulty in the identification of its wild progenitor is the sterility of the cultivars”, though it is thought to be descended from the species Allium longicuspis, which grows wild in central and southwestern Asia.[6][dead link][7] Allium sativum grows in the wild in areas where it has become naturalized. The “wild garlic”, “crow garlic”, and “field garlic” of Britain are members of the species Allium ursinum, Allium vineale, and Allium oleraceum, respectively. In North America, Allium vineale (known as “wild garlic” or “crow garlic”) and Allium canadense, known as “meadow garlic” or “wild garlic” and “wild onion”, are common weeds in fields.[8] One of the best-known “garlics”, the so-called elephant garlic, is actually a wild leek (Allium ampeloprasum), and not a true garlic. Single clove garlic (also called pearl or solo garlic) originated in the Yunnan province of China.  Garlic Stuffed Olives

Combine all ingredients, beat with electric mixer for 5 minutes, chill, and serve with crackers. …. MMMMMMMM…Yummy !!