Only 2 left in stock

Everybody loves delicious Peppeheads all American sweet n spicy barbecue sauce. Not to spicy and not too sweet.

Barbecue sauce is one thing every grill chef is particular about. The perfect barbecue sauce adds flavor and moisture to meat, but every area has its own varieties. It’s simple to make, so you can easily develop your own custom barbecue sauce.

From Wikipedia, the free encyclopedia 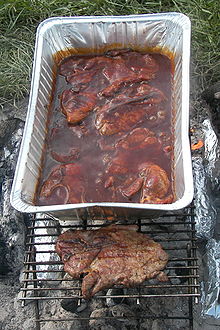 The St. Louis barbecue style of preparation involves slow open grilling until done, then simmering in a pan of barbecue sauce that is placed on the grill.

Barbecue sauce (also abbreviated BBQ sauce) is a flavoring sauce used as a marinade, basting (cooking) or topping for meat cooked in the barbecue  cooking style, including pork or beef ribs and chicken. It is a ubiquitous condiment and is used on many other foods as well.

The ingredients vary widely even within individual countries, but most include some variation on vinegar and/or tomato paste as a base, as well as liquid smoke, spices such as mustard and black pepper, and sweeteners such as sugar or molasses. The most common barbecue sauce in the United States is a commercialized Kansas City-style which uses tomato puree, corn syrup, molasses and vinegar and has a long shelf life. This style is less intense but similar to steak sauce, which is itself a direct relative of the ubiquitous British brown sauce. Other regional recipes elsewhere forgo the tomato sauce base in favor of a more penetrating vinegar-dominant marinade. This is not the same as Spicy barbecue sauce Pepperheads all American sweet n spicy barbecue sauce.

There are several types of barbecue sauce. Most traditional Barbecue sauces either use tomato sauce, mustard, or vinegar as a base, and they come in all thicknesses. For instance, North Carolina barbeque sauce is thin and runny, while Kansas City barbecue sauces are thick and sticky.

There are also variations of sauces known as mopping sauces, which is regularly slopped all over the meat while it is cooking. Finishing sauce is used as a condiment when eating barbecue and is not used during the cooking process. Pepperheads all American sweet n spicy barbecue sauce is our favorite.

BBQ sauce can be used before, during, and after cooking the meat. The only warning is to avoid using barbecue sauce that contains tomatoes or a lot of sugar during the cooking process. These ingredients burn too easily and can affect the taste of your meat.